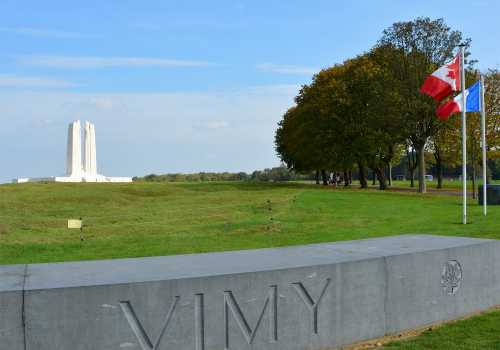 We are a UK based Battlefield tour & travel company specialising in Canadian battlefield tours.Being based in the the UK - at your destination - rather than your departure country and only 2 hours away from the European battlefields it gives us 'real time' expert knowledge and 24/7 customer support for you whilst you are travelling with us.

We are FULLY LICENCED travel professionals. Many other local battlefield tour operators are not. Your money is SAFE with us. We are NOT a budget tour operator, and we firmly believe that our customers should be treated as we like to be treated when we travel: with great care, total professionalism, and providing quality product(s) throughout your travel experience.

Our client testimonials simply say it all.. "The trip was one of the most moving and powerful experiences of my life. You brought everything to life, so much so that I could almost see the battles unfolding"..  "I will be sharing my experience and this history with family & friends forever"... "I will hold your name in high regard and will recommend you to any would be visitors"... "The whole tour was expertly put together and meticulously researched... Thank you!" More testimonials...

We only use highly experienced EXPERT historian guides, most of whom are members of the elite Guild of Battlefield Guides who besides being overall experts for battlefield & remembrance tours are also individual experts for specific battles and battlegrounds for Canadian Forces.

Our guides are experts in WW1 and WW2 specifically where Canadians fought, such as WW1: Neuve Chapelle, the Somme, Vimy, 2nd Battle of Ypres, Passchendaele, Mount Sorrel, Arras & Cambrai. In WW2 the bravery - and disaster at Dieppe, the Battle of the Scheldt: Flushing, Walcheren Causeway, Leopold Canal & Woensdrecht, Cap Griz Nez, Dunkirk & Calais and the Battle of the Rhine.

Last - but not least - we live here. We know here. We provide real 'hands on' knowledge and support in the same time-zone - while you are here in the UK and Europe. The main battlefields of Europe are on our doorstep and in most cases - only hours away from us.

no dates selected yet 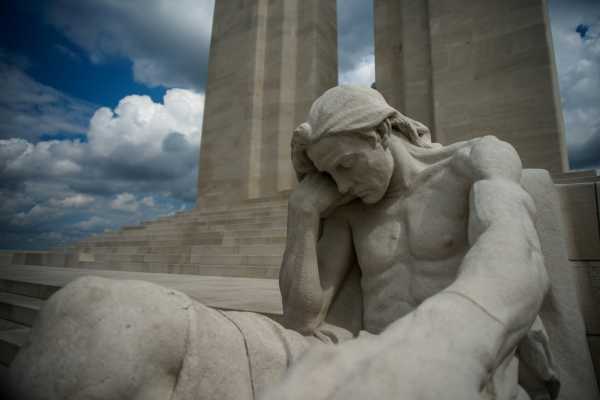 Canada and WW1 At 10.58 hours in the Belgian village of Ville-sur-Haine on November 11, 1918 a single 7.92mm round fired by a German sniper hit Private George Lawrence Price of "A" Company, 28th Battalion, Canadian Expeditionary Force. Price died instantly. Two minutes later at 11.00 hours the First World War ended. With his death Price would become the last soldier of the British Empire to be killed in the war. By then, Canada had lost 66,975 men through enemy action. Canadian troops and the men of Newfoundland  fought with great courage and distinction in World War I winning 71 Victoria Crosses. Our Birth of a Nation Vimy Day Tours from London and Lille pay tribute to the brave men and woman of Canada who have and continue to serve our Country.  we remember at the 'once in a lifetime' 100 year Vimy Ridge Day centennial ceremony at the Canadian National Vimy Memorial in northern France. This special day tour will take you to the official ceremony of the Centenary of the Battle of Vimy Ridge on 9 April, 2017, and a selection of the key Canadian battlegrounds of WW1: Vimy Ridge and the Ypres area. Come with Spirit of Remembrance on this special day and walk over land that through courage and enormous sacrifice has forever become a part of Canada.  We are honoured to welcome Jon Nicholls as our special guest historian and battlefield guide on this tour.  He is author of Cheerful Sacrifice: The Battle of Arras 1917

Back to gallery
Join us in summer in September 2020 in England for our amazing and truly historic 80th anniversary tour for the Battle of Britain (BoB) - reliving and remembering the Battle of Britain in August September of 1940, when the fate of the free world hung in the balance, as the 'few' - as the under-manned RAF - took on the might of the Luftwaffe in their Spitfires and Hurricanes - and against all odds - won. A pivotal and incredibly historic battle that changed the course of the war - and enables us to enjoy the freedoms we have today. Please note that we will not be advised of the actual dates for the Duxford Battle of Britain 80th Anniversary Air Show (which is included in the tour) until mid 2019, however we are confident this superb and very pivotal air show will be 19/20 September 2020. Our amazing and historic 80th Aniversary BoB Tour will be released shortly (end April 2019)

Airshows are the best place to see second world war aircraft.  But there is much more to see around the country. The Battle of Britain was fought by the Few, the fighter pilots in the air. But it was directed by the extraordinary command and control system based on radar devised by Dowding and kept secret from the Germans. The air battle left its traces on the ground, in buildings and battle damage.  There is much to see that reveals the human dimension of the battle.

DAY 1: Saturday 12 September 2020
Arrive in London at your convenience
Check into your hotel from 2.00pm, (early check in can be arranged for an additional cost)
Day and evening at leisure

DAY 2: Sunday 13 September 2020
Breakfast in hotel
This morning we set off my foot for a WW2 familiarizastion walk guided by your battlefield historian which will cover the Battle of Britain and the Blitz.
The following places will be visited: (approximatly 2 hours in total - 1 hour walking)
* Churchill War Rooms,
* Guards Chapel - Context of D Day. A reminder of Hitler's strategy for 1944 - terrorise London
* Thames Embankment - RAF Memorial - Fleet Air Arm memorial - and Battle of Britain memorials. Reminder of air forces contribution to victory. The route takes us past No 1 Richmond Terrace the location of Combined Operations HQ. There is no Combined operations museum
* Whitehall past the cenotaph and memorials to Women in War, Montgomery and Alanbrooke.
* Cross Horse guards to the statue of Lord Louis Mountbatten. As chief of Combined Operations he led the organisation which did much to develop the techniques used on D Day, as well as preparing the ground with the aggressive raids on occupied Europe.
*  The Admiralty Citadel, the Royal Navy's command and communications centre for its world wide operations. In passing we see the Royal Marines' memorial
* Via Waterloo place where bomb damage can still be seen and 3 Carlton Gardens, St. James's, London SW1Y 5AA, the Free French HQ in London to St James' Place. (Not shown on my map but on the route - ran out of google map points)
* Norfolk House, where Operation Overlord was planned by the COSSAC staff.
* The Churchill and Roosevelt on a bench statue. A place to talk about their relationship
* Grosvenor Square. HQ ETOUSA and Eisenhower's HQ Finish Grosvenor Hotel We need to visit the ball room. The biggest room in London and the only one biog enough to serve as the ETOUSA mess hall. Tea or Cocktails. If wished we can look out at Hyde park to where Mary Churchill served in a searchlight battery. She and her mother were witnesses to the V1 falling on the Guards Chapel. (point 2)

Lunch is included
Afternoon visit to the Imperial War Museum with your guide (optional)
Return to your hotel for a well deserved rest and to freshen up before dinner.
Welcome dinner at an exclusive London club.

Interesting note: Today is the 80th anniversary of the bobing of Buckingham Palace

DAY 3: Mon. 14 September 2020
Breakfast in the hotel
Check out of our London hotel and board our coach to drive north to Bentley Priory
We start the with a visit to the nerve centre of Fighter Command, Bentley Priory, where Dowding was based.
Visit Fighter Command HQ
Lunch at Bently Priory Cafe
Next we visit the underground HQ of Uxbridge No 11 Group Bunker from where the main air battles of Britain were fought. In this bunker on 15th September Winston Churchill watched the climactic day of the battle of Britain here.
(Note The bunker is accessed via 76 steps and may be unsuitable for those with reduced mobility)

We then are privileged to visit the historic Sector HQ and Battle of Britain fighter airfield at RAF Northolt and the spiritual home of the exiled Polish Air force.  Outside the airfield is the memorial to the members of the Polish wild geese who played such a big part in defending Britain. We visit the Polish Memorial.   RAF Northolt Sector Operations room
We drive to the Orchard a Public House and restaurant frequented by Polish airmen in WW2
Drive south to Folkestone
Check into hotel
Dinner

Day 4: Tuesday 15 September 2020 (Battle of Britain Day)
Hellfire Corner- the Airfields under Attack: Today we visit “Hellfire Corner” The south east of Kent and the closest points in England to the Germans bases in the Pas De Calais in France.  Weather permitting we may be able to see Cap Gris Nez in France where Herman Goering inspected the British defences. Battle of Britain Memorial Visit National Memorial to the Few Battle of Britain Service We drive to the white cliffs at Dover where journalists reported digfights over the channel as if they were sports matches
Ramsgate The Spitfire & Hurricane Memorial Museum
Manston Manston Museum at the site of the advanced airfield under frequent heavy Luftwaffe attacks
Lunch Manston
Depart for RAF Kenley - Story of Attack on RAF Kenley 18 August 1940
Depart for RAF Croyden
Story of attack on Croyden 15 Aug 1940

Day 5: Wednesday 16 September 2020
Breakfast
Brooklands to Brookwood: Brooklands Aviation Museum -  Brooklands Museum – The birthplace of the Hawker Hurricane the birthplace of British aviation and motor racing. This was the location of the Vickers and Hawker factories.
In the afternoon we drive to Brookwood Military Cemetery where many of the British and German are buried. Visit the RAF Memorial to the Missing at Runnymede, Sited overlooking London Airport this memorial commemorates over 20,000 airmen who have no known grave. There will be a short act of Remembrance for those who wish to take part.

Day 8: Saturday 19th September 2020  Duxford
official 80th Anniversary BOB Airshow opens 0800
Early bird Sat £30 Flightline Walk (Sat) £5 Visit the Flightline Walk and get up close to the aircraft you'll be seeing in the skies during our action-packed flying display. Grandstand Experience £15 Enjoy our tiered seating enclosure especially created to provide photographers, enthusiasts and aircraft fans with an uninterrupted view of all the flying action. Must be bought with a valid air show ticket. Outdoor seating enclosure on the Flightline Walk, Allocated seat throughout the day – note that seats are allocated on arrival Exclusive toilet facilities Souvenir package £12 Exclusive souvenir package includes air show programme, pin badge & lanyard - to be collected on arrival on the day.

Interesting note: ** Today is the 75th Anniversary of Lord Haw Haw being sentenced to death in London ***

Day 9: Sunday 20th September 2020  London
Battle of Britain Annual Service at Westminster Cathedral. Note ticket required. (*Apply in June 2020) (This will be a winner… ???? )
(A tradition has grown that the remaining Battle of Britain veterans and their families hold their own, private service in the chapel prior to the Service of Thanksgiving and Rededication on Battle of Britain Sunday…)
Rest of day at leisure.
Dinner: Churchill war rooms Westminster Abbey: Guest Speaker: Seb Cox or ano from the RAF historical section

Land Tour Price does Include:

Tour Price does NOT Include: