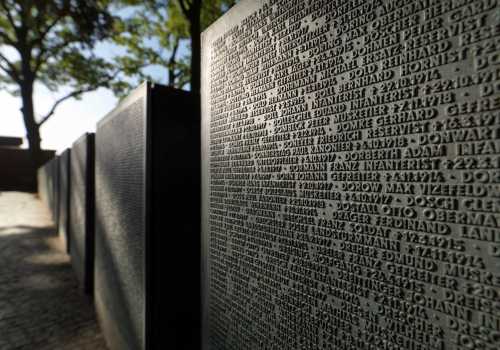 The German cemeteries are maintained by the Volksbund Deutsche Kriegsgraberf Orsorge. Unlike its British and French equivalents this was originally a private organisation relying heavily on public donation and help. Nowadays these cemeteries receive German Government funding and the organisation employs many full time staff. However, given the organisation's origins in the political and financial chaos of early 1920's Germany, there has always been a strong tradition of self-help and great emphasis is placed on voluntary work, particularly by young people in order to help maintain them. Summer work camps are popular and well attended.

The Style of Cemetery

Unlike British and French cemeteries, the style of German cemetery is not constant and if you visit a cemetery in Flanders such as Langemark, and then visit one on the Somme or near Arras or Verdun you will see many differences. However they do have basic ideas in common;

1.The architects were trying to convey the waste and sorrow of warfare. German cemeteries are always sad, rather depressing places and this is quite intentional.

2.The architects had to deal with the problem of fitting sometimes quite large numbers of bodies into the relatively small area of land that their former enemies would allow them. This is why each grave marker, whether headstone or cross has several or many names on it.