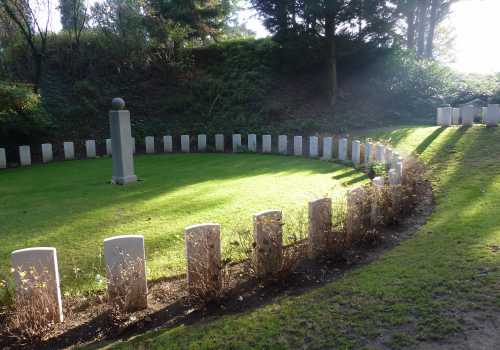 All the British and Commonwealth cemeteries that you see on your visit were built and are maintained by this organisation. It was established in 1917, towards the end of the First World War, largely at the instigation of a man called Fabian Ware. The job of the Commission is still fundamentally the same as it was when established, to mark and maintain the graves of members of the forces of the Commonwealth killed in action during the two World Wars, to build memorials to those with no known grave, and to keep an accurate record and register of the dead that may be consulted by their relatives.

The Commission is a large organisation, with a staff of 1,300, the majority of whom are gardeners and craftsmen. They look after 2,500 cemeteries spread over 140 countries world-wide, although by far the greatest concentration are in north-west Europe, particularly in France and Belgium. Over 900,000 men and women killed in the two World Wars are buried under CWGC headstones over identified graves, and a further 800,000 are commemorated on memorials to the missing such as the one at Thiepval. The cemeteries that you see today in France and Belgium reflect the principles that Fabian Ware set down in 1917.

There is a great emphasis on individual remembrance, so that every serviceman or woman killed in the Western Front has their name commemorated there once, either on a named headstone or on a memorial. All the dead were to be treated equally, hence the uniformity of the headstones.

There was to be no repatriation of bodies, again for reasons of equality. Left to the families, the rich would be able to take their dead back to the country of origin and the poor would not. It was to prevent this and to ensure equality of treatment that Ware insisted in 1915 that all servicemen or women killed in a theatre of war should be buried there. It is a principle that has been followed world-wide until very recently and was certainly followed in the years after World War One. All the Empire dead of the Western Front (with the exception of those evacuated home wounded who died later) still lie here.